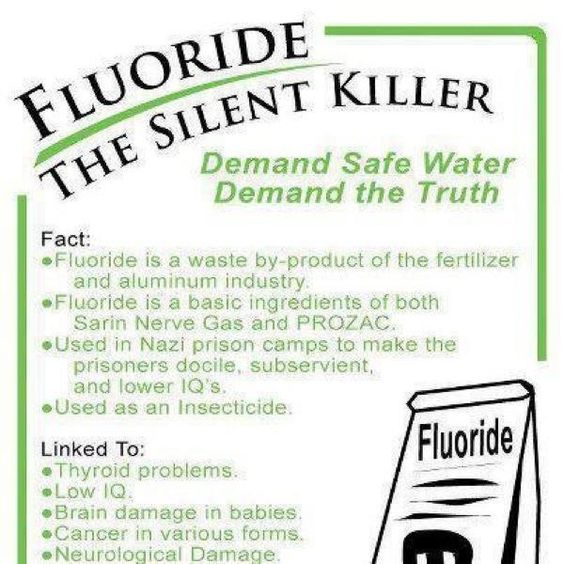 Fluoride is Not the Answer

I have been saying this for years. This is no joke. Why would you rather pay $10 for 4 cases of water with poison in it than $5 for a case of water without poison? Do you ever wonder why the water is on sale for $10 for 4 cases of water? Do you think someone is being nice to us because they care about us? Poisoning yourself is one thing (not such a good idea), but when you share this junk with your kids? Unfortunately, my daughter gets embarrassed when she is in the store with me. She thinks I have a big mouth. I am simply telling people the truth about products and it is a shame that she is embarrassed about "truth." This is because all we hear is lies and cover-ups.

Remove Fluoride from Your Life

For those of you who are unaware that you can refuse fluoride treatments at the dentist office for your children, you can. I refuse the treatment for my daughter and the reactions from the dental assistants are appalling. I am sure that those aware of the dangers of fluoride already refuse this treatment for their children, why wouldn't we? Knowing fluoride is toxic and letting our children consume it is a form of homicide.

I am not sure how to understand why North Americans still allow fluoride in drinking water and toothpaste. It is banned in Europe and should be. Hurrah for Europe! Tooth decay has declined in many years even in those populations who do not use fluoride which tells you that fluoride is not what is aiding in the decline in tooth decay. To be honest, even if it contributed to the decline in tooth decay, the other hazards it causes to our health isn't worth worrying about using fluoridated toothpaste.

Natural fluoride from the earth is called calcium fluoride and does not cause cancer and brain damage, is naturally occurring from Earth and is in the soil; therefore, it will be an ingredient is spring water. People living in rural areas; however, who drink groundwater with elevated levels of calcium fluoride have experienced "outbreaks of skeletal fluorosis or calcification of the joints that can cause discomfort and deformity."

Synthetic fluoride (purposely added to our drinking water in 1945 and then toothpaste) called sodium fluoride is quite harmful. As I have stated in the past on many social network platforms and to my children who have children and to friends, it is very harmful. Hitler used it in concentration camps to keep people docile and it has been used in our prison system for the same reason.

Synthetic fluoride is a harmful chemical "widely believed to contain cancer-causing agents" and in its purest form, can eat through concrete. Sodium fluoride has been changed to fluorosilicic acid for drinking water; however, I am reading that the fluoride added to toothpaste is still sodium fluoride which is said to cause certain types of cancer as stated above, brain damage and a lower IQ.

According to the American Cancer Society, studies showed that there was a bone cancer that could have been caused by fluoride that may affect males only and was shown in male rats and not mice or females. Many studies have taken place ever and show there is no real threat; however; there haven't been enough cases to conclude.

Big business, hard to trust. Who do we trust? When in question...DO NOT USE FLUORIDE unless it is naturally occurring.

Here is my conclusion about the bone health issues they presented. In rural populations where there is more naturally occurring fluoride, where people drink a lot of groundwater leading to an excess of calcium fluoride, they obviously have these health issues due to a large amount of calcium intake. This is the same as the warning I have been preaching about for many years regarding cow's milk. DO NOT drink it.

You are not a calf and you do not need a cow's milk. You are human. Cow's milk is meant for 400-pound calves. Is there a reason that human's need to consume another animal's milk? Do cows consume human milk? No, it probably would not nourish them, being we do not have to nourish 400-pound humans. Their milk; then, is too much for our bones. Shall I go on about how weird it is to drink a liquid that comes from the breast of a cow?

With regard to fluoride and brain damage, lower IQ and docility as a result of purposely adding synthetic fluoride to water and toothpaste, the answer is telling. Hitler used it for a reason and although he may have been evil for killing humans, he was very intelligent and obviously a brilliant and manipulating orator.

The links below come from an internet search on what the public will read and can read with understanding. It is not that I do not find them reputable, it is that two of them are conducting research for an individual purpose such as we did this research to make our bottled water healthier and another conclusion comes from American Cancer Society who is probably as trustworthy as pharma. I mean, there has always been a cure for cancer so that should answer your questions you may have in doubting my opinion of their reputation and truthfulness.

Read this...which is a little more my speed...a real study, academic papers as compared to those who talk about studies using their own "want to sway you in their direction" MENTION of studies!"

There are many ways to get to the bottom of this and learn for yourselves that fluoride is actually toxic. I read a few articles written by dentists. Dentists have one view because they have been trained to tell people how fluoride reduces tooth decay. I read an article where a dentist stated that Hitler using fluoride and it making us docile and causing cancer and something about the Illuminati wanting us to use it are all conspiracy theories.

They are not conspiracy theories so I do not believe dentists who push fluoride because they are simply defending themselves. The American Cancer Society said that test results were not conclusive due to a smaller than needed population taking tests. Further; and again, even if fluoride is not a cause of cancer, it is still a hazard to our health. Nevermind what the dentists and ACS say. Even pharma lies as we all know.

Does big pharma want to admit that prozac is fluoride? If you are still having issues believing that fluoride is harmful to us based on conclusions from people you trust like dentists and the ACS, then at least look at prozac. Again, Hitler used fluoride on his victims to ensure they are docile. What effect does prozac have on its users? It makes them docile and lazy. Some even become impotent. Imagine not being able to have an orgasm due to fluoride? Well, this is the case. You can read that here https://thelittleshamanhealing.wordpress.com/2015/10/05/does-prozac-contain-fluoride/ and you can read here the ingredients in prozac. You should read it because pharma insists that prozac is made from many chemicals and not a lot of fluoride. The fact of the matter is that prozac does include quite a few ingredients; however, only one is active:

IN SHORT, FLUORIDE IS TOXIC TO THE PLANET AND ITS INHABITANTS!!! IT IS GATHERED FROM POISONS AND GIVEN TO US. IT IS USED IN PESTICIDES AND INSECTICIDES. WE ARE ALSO ANIMALS SO IT STILL AFFECTS US, ONLY AT A LONGER TIME PERIOD. IF; HOWEVER, WE CONSUME AN IMMEDIATE HIGH LEVEL OF THIS TOXIN, WE WILL BE AFFECTED IMMEDIATELY WITH HEART OR OTHER HEALTH ISSUES.

Creators of Our Lives